The village of Grandtully (or Grantully, as it was spelt until the coming of the railway), lies on the south bank of the Tay, opposite the village of Strathtay. The two places form a single community, linked by Grandtully Bridge, which was built in 1868, to give the inhabitants of Strathtay access to Grandtully railway station. 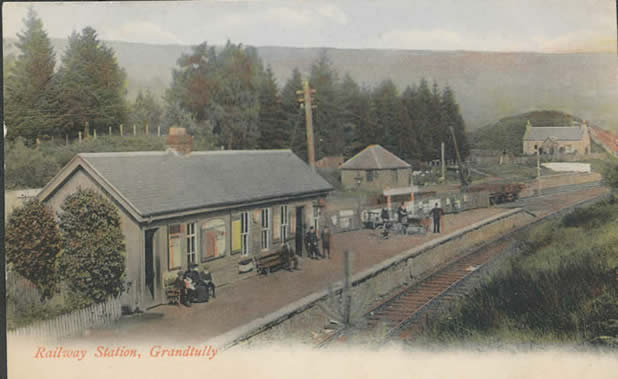 The name is derived from the Gaelic garan tullach, meaning “the rough mound”. The name also applies to the estate surrounding the village, an area which used to cover some 10,000 acres and which belonged, since about 1400, to the Steuarts of Grantully. The estate was also a barony (land held directly from the crown) and in early times it was also a regality (the laird having the right of pit and gallows within his own jurisdiction). The site of the moot hill of Grantully, from whence the laird dispensed justice, is now a rubbish dump beside the road, where the track to Cultullich joins the road from Grantully to Aberfeldy, about a mile to the east of Aberfeldy.

The history of the village is inextricably linked with that of the estate, since the whole settlement was part of it until the estate was sold and split up in 1979.

One of the principal buildings is Grantully Hotel, which offered accommodation and refreshment to all who passed by, and to parties of fishermen, and fisherwomen, who would stay there, sometimes for a whole month at a time, to enjoy the Grantully salmon fishings. Mr. Waddle, who took the fishing for the months of March and April for many years in the 1950s and 1960s, always stayed at the Hotel; one year he caught 71 fish in March and 72 in April. That was when John Moffat was mine host and ran the establishment in a very affable and friendly way, making it the place of choice for many travellers and long-stay guests alike.

The backyard of the Hotel was the scene of a gruesome event in the mid-19th century, known as the Tomtayewan Murder. The story goes that there was only one “honest” man in the fermtoun of Tomtayewan, some three miles to the west of the village; the other inhabitants, being less honest, disliked him intensely. Eventually dislike turned to hatred and his immediate neighbours plotted to do away with him. They lured him to the public bar at Grantully Hotel one dark winter’s night and managed to get him drunk. They then dragged him outside, held him down and poured a kettleful of boiling water into him with the aid of a funnel. The body was then hidden in a cart of peats and driven back towards Tomtayewan, as far as the Ward Wood, just beyond Grantully Castle; there he was buried in what was ever afterwards called “The Valley of Bones”, being a seemingly harmless Biblical allusion which masked a much more recent and grizzly truth. This story was handed down by The Rev’d. John Maclean, Minister of Grantully at the turn of the nineteenth century.

John Maclean was a very considerable antiquary and botanist and possessed a wide range of knowledge of the area’s history and folklore, but he could never be persuaded to write down all that he knew, so that he went to his grave leaving only a few stories in the memories of his hearers. Some of these tales were subsequently written down from memory and are preserved in the book The Folklore of Strathtay and Grandtully (1927).

Innes Ewan’s shop, which was a general store established in the 1940s, was housed in a corrugated iron shed on approximately the site now occupied by the west extension of the Inn on the Tay. It ceased trading in about 19##.

To the east of the Hotel stands a house which was known as Grantully Bridge House. For many years it housed the Post Office and general store. Eventually an extension was built between it and the Hotel and this was successively a grocers and general store, an ironmongers and, in Mr. Moffat’s time an antique shop. The Moffats eventually acquired the main house, where they lived until retiring in 19##. The ground floor became an extension of their antique shop and tweed and tartan emporium.

Just above the Grantully Bridge is a marking stone, by which fishermen (and now canoeists) can gauge the height of water. In the hot dry summer of 1955, when there was no rain for more than seven weeks, the river reached its all-time recorded low. The marking stone was so far out of the water that a different location had to be found to record the level. Another stone was found, on which the previous record low had been recorded in 1919. The 1955 level was some six inches below the 1919 line. 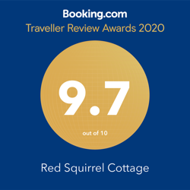